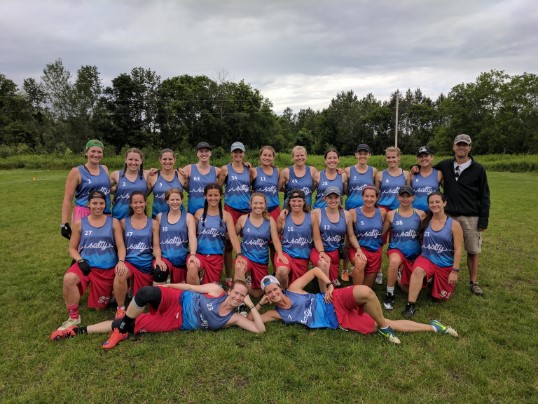 Salty is the women's competitive touring club team in Nova Scotia. Formed in 2005, Salty has represented Nova Scotia and Atlantic Canada the Canadian ultimate Championships, as well as other various tournaments across Canada. Salty is based out of Halifax, and trains year round with tryouts held in the late spring. They regularly host clinics during the indoor season (fall/winter) for women to develop their ultimate game, regardless of their skill level.

Salty has a roster of approximately 26 ladies, and play in four to five tournaments across Canada each year. The team is based out of Halifax, with open tryouts held each year in the spring. The current captains are Sara Sparavalo, Breagh Wallebeck, and Catherine MacPhail, with Stephen Locke as their head coach.

For more information on Salty Ultimate, as well as upcoming events, visit their Facebook page, Twitter, or email them at This email address is being protected from spambots. You need JavaScript enabled to view it.